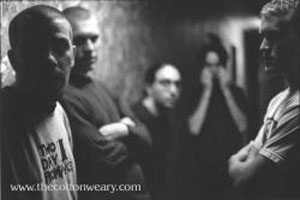 Sean was having some issues at this point where he could house a recording studio, so it became something of a moving operation.  When Brian returned from Europe, having spent a greater portion of the time imbibing many fine spirits – his voice was in no shape to be recorded.  He needed some time to get his voice back.  But it seemed like when Brian was ready, Sean was not and vice-versa.  Brian did get in and started recording only to have Sean's computer crash and erase all of the work.  By the time these issues were fixed and Brian could return to finish his tracks, he blew his voice out quickly.  This coupled with the rest of the band’s harassment as to when he was going to finish made him quickly lose interest in finishing the record and generally being in the band.


The full length, to be named Your Three Minute Pop was never finished.
That’s the end of the cotton weary.  Jay Gerstner would found the band Encrypt Manuscript.  Mike Satzinger would briefly tour with Breaking Pangaea before going on to the PA-based bands Pilot Round the Sun and Safari So Good.  Phil and I would start Satellite Lost in 2003, which would last briefly until Phil moved to get his doctorate at UCLA.  Jason (me) would start Circle the Sun and later Steady As She Goes.  Mary Ellen Devaux would perform under her own name, and also was briefly a part of both Playing Dead and God’s Gift to Women.  Ian Tauber and Mike Rawluk would play in Special Guest Star.  Charlie Seich would eventually become the drummer for The Narrative.


I can safely say that there will be no reunion.
Even though Brian never did finish the Your Three Minute Pop recordings, I was able to unearth some of what was done during the sessions.  With the advent of home digital recording I was able to piece together versions of “Flickering Lights” and “Second Chapter” which, while far from perfect at least provide some vocals.
Sorry for the longest post ever.  These are the downloads for everything.  I divided things up into Vol. 1 (pre-Phil and Jay) which includes the mostly unreleased demos with Mary Ellen, The First to Come in Last demo, the Viva Maestro EP, the track for the unreleased Motherbox split "The Last Place You'd Look" (which Ian would reuse and be a better fit for a Special Guest Star as "Dead Letter Day") and a few tracks from a live WCRN broadcast.  Vol. 2  is with Phil and Jay and includes the Cinematic Overtones EP, the two tracks from the House Divided 5-Way Split, and pretty much for the first time - all of the instrumental tracks for Your Three Minute Pop as well as two tracks that I mixed whatever vocals Brian had recorded for them.  Also for those interested, I've included a third download that includes three live tracks that were on various comps and splits, an out-take from Your Three Minute Pop, and a bunch of other acoustic demos and live practice stuff.
THE COTTON WEARY:
Vol. 1: Demos, The First To Come in Last Demo, Viva Maestro! EP and more: http://www.mediafire.com/?a81o93v4ey28492
Vol 2: Cinematic Overtones EP, House Divided Split Tracks, Your Three Minute Pop:
http://www.mediafire.com/?wj5mmxip2ojpmgz
Bonus Demo & Live Stuff: http://www.mediafire.com/?90i5h7l6pu0ad7i
Here is the video for "My Own Private Island":
Other links:
MySpace Page: www.myspace.com/thecottonweary
Long Island Band Wiki Page: http://longislandmusicscene.wikia.com/wiki/The_Cotton_Weary
CDs are still available from Break Even here: http://www.breakeven.org/
Posted by to live and die on LI at 7:37 AM

to live and die on LI
This is a blog dedicated to music from the Long Island scene. This blog is intended to offer a single home on the web to download music from bands, both current and past instead of having to scour the net for every last track from bands that have long since winked out of existence. The overriding motivation in doing this is to have as much of a complete almanac of indie, hardcore, emo and other bands that existed on Long Island. Well, except Ska. Ska gives me a rash. By definition this means that I remove any bias that I had for these bands, pro or con. I would like this blog to serve as any easy to use resource. Please get in contact if you have music you'd like to see added or contribute. This is an open forum.