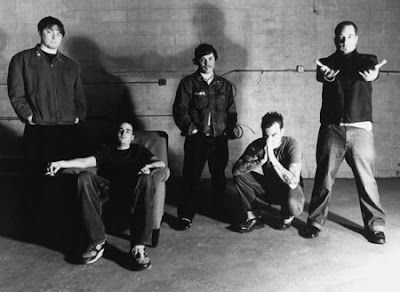 Dearly Departed wound up being something of a Long Island supergroup from its outset in 2001.  It wasn't intended that way, but the early presentation of the band couldn't help but lean in that direction with ex members of Inside, Scarab, Tension* and Helen of Troy all being advertised.  The band would outgrow this, and forge ahead with a style that was outside of what most of their contemporary bands were doing.

Mike Mallamo was the former singer of Inside and he had been jamming on and off with Ryan Albrecht.  Jeff Bodzer, guitarist of the recently split Helen of Troy was looking to join something very different from Troy's structured chaos and Mallamo had asked him to play.  Concurrently, Joe Rubino of Tension* was looking to put something together with Danny Lopez whose band Redshift had just broken up.  Joe asked Mike to play and as he was already planning on something with Ryan and Jeff it all came together.

The band went through several different names, playing their first show as Io with RC Driver at Someplace Else in Farmingdale.  I do recall drinking heavily that evening, but I remember enjoying the band's set, remembering the song "The Masquerade" since it sort of recalled Inside, and I liked the name Io. I can't say I remember much else and I don't remember RC Driver's set at all, even though I do remember watching them play.  I was surprised to see the band with all of these guys in it together at the time.

The band would briefly be known as "The Messenger" before settling on Dearly Departed.  They would quickly produce an EP called "The Remains of Marianne Mayweather" that was released on One Day Savior records in 2002.  The band gained a large following certainly drawing from the interest of their previous bands, but they delivered with powerful songs and interesting arrangements that recalled Radiohead, Codeseven, and Cave In's Jupiter.  It was heavy at times, but very atmospheric.

2003 saw the band continue to build their following locally and with tours.  The also began production on a full length album which would become "Believing in Ghosts" with former Inside guitarist-turned producer Jon Florencio.  Around this time, Labels became interested in the band and without getting into too many tangents on the business side of what was happening, things began to get complicated.  The band was having a difficult time being able to finish the album for many reasons and there was a substantial amount of strain being exerted on the entire project.

Finally in January of 2004, the band played a CD release show for "Believing in Ghosts" that was being released by One Day Savior.  The thing was... the CDs actually weren't ready.  A special edition CDr with different packaging was given to everyone that purchased a disc and they were mailed the actual finished CD once it became available.  I have to give ODS credit here, as while that sounds like a crapshoot, they made good and sent CDs out to everyone that provided an address and bought a CD.  The band played a great set highlighted by new songs like "Shadowcasting", "I reserve the right to Scream Bloody Murder" and "Dragging the Lake."

Jeff Bodzer left the band in June of 2004 to move to Florida, and your author was tapped at one point to take his place.  I can't remember if I jammed with the guys 3 or 4 times.  I loved the music the band was doing, but I couldn't tour so that removed me from being a possible replacement.  The band failed to find a replacement at that point for Bodzer, but did play a final show with him in Decemember 29, 2004 at Backstreet Blues in Rockville Centre, NY with Seer and Magnetic North.

In the interim, Mike Mallamo joined the band Novena and Joe Rubino played with Tension*.

The following December with Jeff  Bodzer back in the fold the band played a reunion show on December 30th, 2005 with a reunited Satellite Lost playing their last show, as well as With Every Idle Hour, Nakatomi Plaza, Slingshot Dakaota and Con Amore.  The band decided to continue on as a band, originally planning to record songs such as "And the Horse You Rode In On" and "Juggling Chainsaws (Look Ma No Hands)" that they hadn't had the opportunity to do prior to the breakup.

Ryan Albrecht was soon replaced by Jon Cox, former guitarist for Tension*, From Autumn to Ashes and Earth.ling Massive.  Cox brought a heavier dimension to their music and this lineup recorded the album "What Awaits Us" which was released on their own Black Tide Records in 2007.  This album featured a re-recorded version of "The Masquerade" as well as new songs and recorded versions of some of the older material as well.  It was released in At the album's completion, Cox left the band and again they were left without a second guitar player.  Ryan Luken joined, before being replaced with Derek Sessions.

Mike Mallamo briefly quit the band at some point prior to the release of "What Awaits Us" and the band  continued on as an instrumental band named Dead Birds Don't Sing.  Tensions eventually settled and Mallamo rejoined the band and saw it through to its conclusion.  This time there was not a show that stated the finality of the band.  The members just began to go in different directions and the last show they played was May 25th, 2008 at The Nutty Irishman in Bayshore for a Lukemia benefit with God Fires Man and Revenge of the Dragon.

Joe Rubino went on to form the Jett Black Heart Attack and 1776.  Danny Lopez would form Steady As She Goes.  Both Danny and Joe would back up hip-hop acts with live instrumentation on occasion as well. Mike Mallamo would go on to sing for the short-lived band Mt. Morning.  Jeff Bodzer would briefly play with Steady As She Goes.  I believe that Derek Sessions joined Revenge of the Dragon and is currently in Wiretap Crash as well as doing some solo hip-hop stuff and DJing.

These downloads are for the band's 3 releases:


Go to the band's myspace here: www.myspace.com/dearlydepartedny
Wikpedia entry: http://en.wikipedia.org/wiki/Dearly_Departed
Posted by to live and die on LI at 9:04 AM

Email ThisBlogThis!Share to TwitterShare to FacebookShare to Pinterest
Labels: Dearly Departed, Inside

to live and die on LI
This is a blog dedicated to music from the Long Island scene. This blog is intended to offer a single home on the web to download music from bands, both current and past instead of having to scour the net for every last track from bands that have long since winked out of existence. The overriding motivation in doing this is to have as much of a complete almanac of indie, hardcore, emo and other bands that existed on Long Island. Well, except Ska. Ska gives me a rash. By definition this means that I remove any bias that I had for these bands, pro or con. I would like this blog to serve as any easy to use resource. Please get in contact if you have music you'd like to see added or contribute. This is an open forum.